On Tuesday, October 13, Nippon Express Co., Ltd. (Mitsuru Saito, President) launched its "NEX-SPEED Super-Fast! Atlanta" high-speed consolidated service for air cargo being shipped out of Haneda Airport in Japan to the southeastern US via Atlanta Airport.

"NEX-SPEED Super-Fast! Atlanta" achieves the fastest shipping time available by loading cargo conveyed to Haneda Airport in the morning onto a direct flight bound for Atlanta that same day; once the cargo arrives at Atlanta Airport, the Atlanta Branch of Nippon Express USA, Inc., promptly takes receipt of the cargo from the airline's terminal.

Nippon Express is the only forwarder with a work facility handling both domestic and international cargo inside Haneda Airport, allowing it to sort cargo arriving on domestic flights within the airport and then load the cargo aboard international flights. The company has its own facility（CFS） in close proximity to Atlanta Airport, and this, combined with the (optional) emergency delivery service offered by the Atlanta Branch, enables same-day delivery. With operations at both the departure and arrival points being handled in-house, lead time is about a day and a half less than that of Nippon Express's conventional services.

[Same-day delivery area for Nippon Express's emergency delivery service]
Cargo arriving at Atlanta Airport can be delivered that same day within a radius of approximately 300km from Atlanta, an area that covers most of Georgia and Alabama as well as portions of other neighboring states. 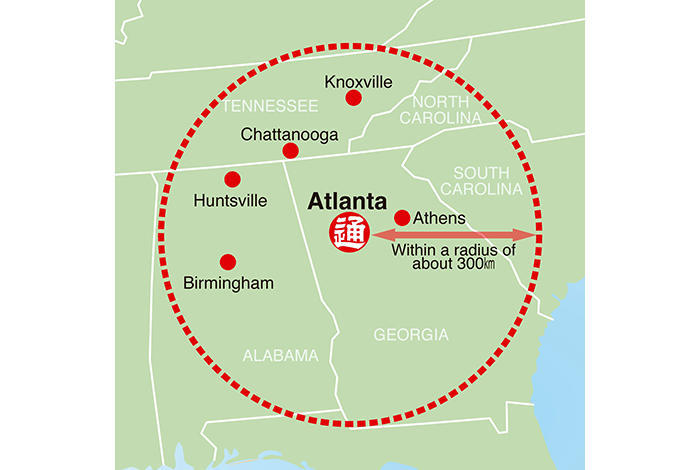 Nippon Express will be continuing to develop services that meet emergency transport needs and endeavoring to optimize customers' supply chains.